Suitable for children aged 2 to 8 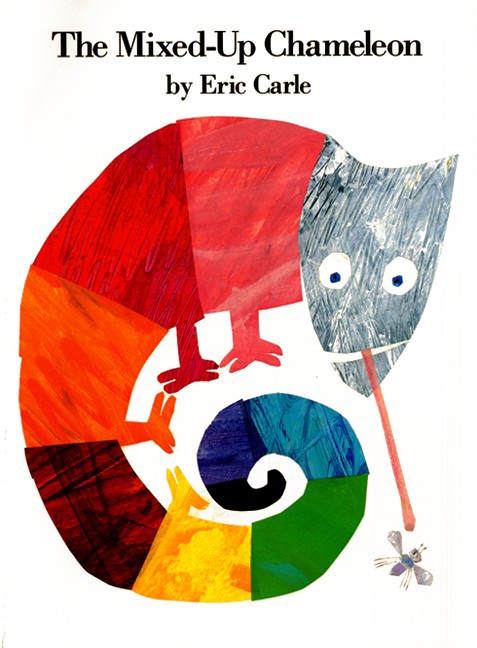 I discovered Eric Carle’s stories when I first started teaching. As well as being enjoyable and entertaining they include lots of wonderful opportunities for learning.

The Story: The chameleon changes colour depending on where it’s sitting or whether it’s warm or cold and when it’s hungry it catches a fly. It doesn’t have a very interesting life but one day it sees a zoo full of animals. It wishes that it could be like a polar bear and its wish comes true. Then it wishes it could be like a flamingo. As well as gaining flamingo wings it also retains some polar bear characteristics. The chameleon carries on wishing and ends up with characteristics from nine different animals and a human but it runs into trouble when it gets hungry and can’t catch a fly. Its last wish is to be a chameleon again so that it can catch the fly, luckily for him that wish also comes true.

The Mixed Up Chameleon is a simple story supported by Eric Carle’s wonderfully colourful illustrations. I have read this story to so many children and they always laugh at the ‘creature’ that the chameleon turns into. With a deer’s antlers, an elephant’s trunk and a giraffe’s neck it looks quite bizarre (and also very colourful) by the end of the story. The text is simple and repetitive, it is the pictures that tell the story and children love spotting each new animal characteristic as the chameleon makes its next wish. The message that The Mixed Up Chameleon portrays is very simple, ‘be yourself’ and enjoy your uniqueness, you won’t necessarily be any better off if you are different. It’s a great book to stimulate discussion about similarities and differences between yourself and others and also to talk about similarities and differences between different animal species.

Nearly forty years after it was first published The Mixed Up Chameleon is timeless and I have used it in so many ways in the classroom, particularly with Reception and Year One children. With its simple repetitive text and picture clues it’s a great book for beginner readers. It introduces ten different animals including the chameleon and explains a chameleon’s colour changing characteristics in a way that young children can easily understand. Each of the animals is a different colour and a beautiful rainbow at the end of the story provides opportunities for consolidating colour recognition. I have used The Mixed Up Chameleon with Year Two children who have chosen their own animal characteristics to make their own mixed up chameleon stories and I’ve also made a wall display using pictures that Reception children have drawn with their own mixed up chameleons.

As well as being entertaining, Eric Carle’s stories introduce a lot of learning. They’re also great books to introduce basic vocabulary to non native English speakers and I’ve often used them in the EFL classroom. Other Eric Carle favourites of mine include Little Cloud (weather and the water cycle), From Head to Toe (parts of the body and movement), The Secret Birthday Message (shapes and position words), Brown Bear, Brown Bear what do you see? (animals) and the classic The Very Hungry Caterpillar (days of the week, lifecycle of a caterpillar and food).

Find The Mixed Up Chameleon at Amazon

Catherine Friess is an Early Years teacher who also has EFL experience with adults and children. She recommends her favourite picture and early chapter books on Story Snug. You can also follow her on Pinterest, Google+ and Twitter.

Why You Should Take Your Kids To The Theatre