My five year old girl informed me that I was taking her out. Just me and her.  “You’re taking me to the movies, Daddy, to see ‘Justin and the Knights of Valour’.  Next Sunday.”

It’s nice, when you have two kids, to be able to spend some quality time with just one of them, you get to see them more as an individual rather than as one of the family. I was really looking forward to it. 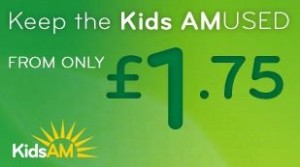 I didn’t know much about ‘Justin and the Knights of Valour’ but, being a cartoon about knights rather than fairies or ponies or puppies, I thought she had chosen wisely for a five year old. Very wisely, Mum informed me, because the cinema had a special deal on Sunday mornings: only £1.75 each to get in.  Bargain.

‘We can get lots of sweets from the pick and mix if you like!’  At £1.75 a ticket, even I was going to trough my way through the evil sugary stuff for once.

Sunday morning arrives and three quarters of an hour before we needed to leave she’s walking around the house in her coat, her hair specially plaited for the occasion and beaming with excitement. It was one of those proud dad moments.

As promised, as soon as we got there, we head to the pick’n’ mix and stuff our cartons full of embarrassing amounts of E numbers and sugary stuff. Greed satisfied, we take the short trip to the drinks counter. They have three sizes, one gallon, two gallons and barrel. ‘Shall we share?’ I ask, thinking that she’ll struggle to even carry the small one let alone drink it. I knew the answer before she said it, of course.

The guy behind the counter pours the fizz, weighs the pick’n’mix and coughs when he sees the weight. He then adds the ticket prices to the bill.

‘Are you sure that’s right?’

‘The £1.75 ticket is for selected movies only. ‘Justin and the Knights of Valour’ isn’t one of them.’

‘Save some for when the film starts,’ my daughter advises.

After fifteen minutes, no-one else had arrived. It feels eerie. Surreal. Just the two of us. We sit in the empty cinema, three rows from the front, when the lights go down and the adverts start. The noise is deafening. It’s so loud I can sense my ears ringing. It actually hurts. My daughter has her hands over her ears. She tries to say something, I can’t hear but I see the grimace on her face.

I pick everything up and move to the back of the cinema. It’s quieter, just a little, but hardly bearable. Eventually, the film starts. Luckily, it isn’t as loud as the adverts. We settle down, eat sweets, sip lemonade and begin watching the film together.

And actually, it’s a good family film. I’m enjoying it. I’m here with my little girl having a great time

I knew what was coming. Just as the film was starting to get towards the climax.

I try to persuade her to stay for a bit longer but no amount of cajoling can stop the unstoppable force. We have to leave. ‘Now, Daddy.’

‘I’ve had a brilliant time with you Daddy,’ she tells me as we get in the car. Priceless.