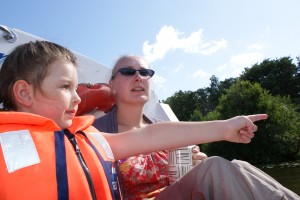 If you are looking for a special day out, then an adventure on the water is a must for young kids.  This Summer we decided to hire a 10 person boat and after press-ganging a crew of relatives into being our shipmates we hoisted the main-brace, got the cannons ready and pirated our way across the dangerous waters of the Norfolk Broads.

Well, it felt like that to the kids. Actually we were on a rather cosy 10 person engined boat and the only Canon was the camera. Still we did have a ship’s privy and a galley from which we were able to make copious cups of tea so we were very comfortable as we raised anchor and cruised at the terrific speed of 5 knots out of the boatyard.

There was lots for the kids to see as we chugged along the waterways. Within minutes we’d seen herons, coots, dragonflies, grebes and many geese, swans, ducks and lots of ducklings. Besides the wildlife there was also a plethora of different boats to admire. The old fashioned wherries were particularly appealing to the young ones, as were the sailing boats, especially when they were tacking too and fro across the waters.

Feeling the need for a spot of lunch we disembarked and had a picnic before deciding to investigate a few of the places that run along the broads. This included going to the top of a windmill and investigating a nature trail where we saw swallowtail caterpillars and a family of swallows nesting in a little education centre.

Like all good pirates, we had had to share out the treasure, which came in the form of an ice cream, before more exploring of the waters; this time of some of the wider broads. As a special treat, the children got to sit with granddad and drive the boat on the way home. Thankfully, there were no near misses, even when we were passed by the giant, Mississippi style paddle-boat and eventually, we made our way back to Blighty, well Wroxham, if you must know. 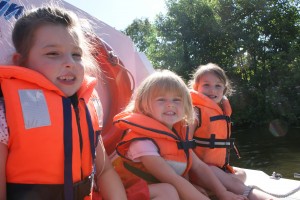 The children said it was one of their best days out and were eager to do it again. We will!

Save Money Every Time You Shop With Cashback