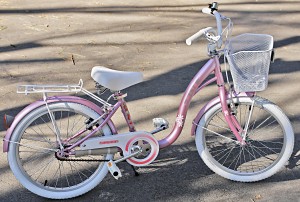 Before we start, we’re not a bike riding family. Not at all. I don’t ride one and my wife’s bike has been untouched in her parents’ garage for the last 18 years. In fact, the only time I’ve ridden one in the last 20 years is when I was fed up of carrying one of the kids’ bikes home from the park and freewheeled the downhill section.

All kids should learn to ride a bike

That said, like all good parents, we thought that bike riding was an essential part of growing up and bought our girls a couple of kids’ bikes a few years ago. Pink ones, with white tyres and a little seat at the back to put the teddy bears in – what else for toddlers?

After two years we have got to the stage where they can ride them adequately to the park and back without getting fed up and without giving us the trouble of pushing them home – which because they are so low to the ground, gives me back ache after about 50 yards.

Anyway, now aged four and five, we decided that it was a bit embarrassing for them to be riding with stabilizers on, especially as most kids their age can do wheelies and stunts and have forgotten what stabilizers are. It was time to be big girls and take off the stabilizers.

So off we went to the local park because we wanted somewhere soft for them to fall and there’s a nice flat path strewn with wood chippings. Fully equipped: two children, two bikes, two helmets, a parent for each child and a pack of plasters, we began our escapade.

Downhill all the way

It began badly. “You will fall off a lot at the beginning,” was meant to assure them that when they did it wouldn’t be failure. However, the eldest took it the wrong way and began crying before we started. Then the real trauma started. I at least thought they’d be able to get on the bikes – but no. Without the stabilizers as soon as they put their feet on the pedals they fell over. Seeing me laugh at one point didn’t earn me any brownie points and after a couple of attempts the eldest, who I had been allocated to, stormed off in the direction of

Then the real trauma started. I thought they’d at least be able to get on the bikes – but no. Without the stabilizers as soon as they put their feet on the pedals they fell over. Seeing me laugh didn’t earn me any brownie points and after a couple of attempts the eldest, who I had been allocated to, stormed off in the direction of

Seeing me laugh didn’t help or earn me any brownie points, and after a couple of attempts the eldest, who I had been allocated to, stormed off in the direction of mum and sister, leaving me stranded with the bike. What I hadn’t seen was mum’s great technique: she held the bike, pushed ’til there was enough speed and then saw the little one manage her first few feet of free travelling.

It was now decided that we swap children. Mum had got the little one going so now she could concentrate on the big one. So I did what mum did with the youngest. ‘Daddy,  you’re pushing the bike too hard.’, ‘Mummy didn’t do it like that.’ She fell off. Fell off again. Fell of again and hurt her leg on the pedal. ‘I want to go with mummy.’

I always thought it was dads who taught their kids to ride. I’ll have to admit failure. Happily, they let mummy help them one at a time whilst sending me off to get them an ice cream. When I’d got back, they’d made some progress. Mummy smiled, happy they were beginning to ride, but part of the smile to herself no doubt that she’d done it better than me. She had. The only thing I’d managed to do well was tto ake the stabilizers off without the bikes falling apart.

Save Money Every Time You Shop With Cashback

Great Days Out for Kids – Eureka