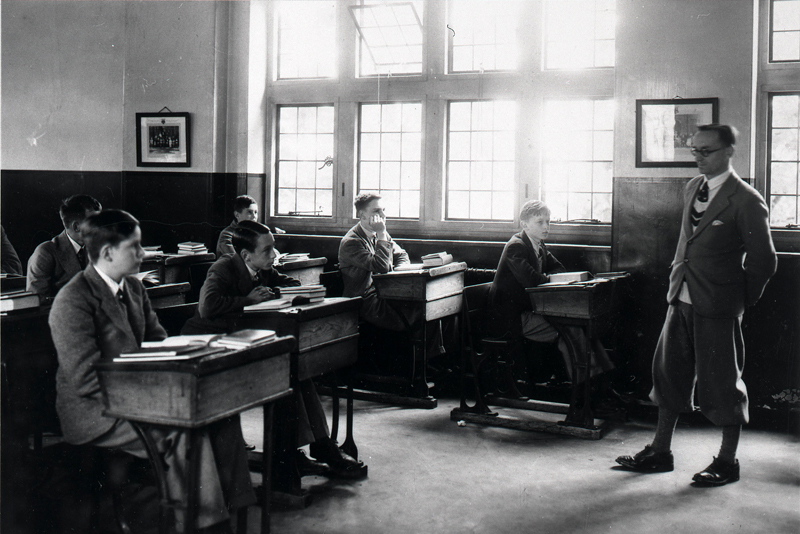 In an average day, a high school teacher can teach well over 100 teenagers in groups as large as 25 – 30. Despite this, most teachers face very few real discipline problems. However, a lot of children who are angels in the classroom can be little terrors at home. So, what is it that teachers do that can help parents improve behaviour at home?

Here are 9 tips to help improve child behaviour at home:

1. Have clearly set out rules and expectations

In schools, these are written in planners and on posters on classroom walls. However, they are seldom read because every kid knows them; so you don’t need to chalk them on the kitchen blackboard.

What you do need to do is to make sure your children know what the rules are – and do use the word ‘rule’, it’s a term that children understand and will reinforce that you have drawn a line that shouldn’t be crossed.

If the rule is ‘No playing computer games after 6 o’clock’, don’t be tempted one day to let them do it if they ask. All you are doing is showing that the rule is not fixed. It’s confusing and the boundary line get’s blurred. Once this happens and you catch them on a computer after 6 o’clock and try to tell them off, all they will say is, ‘ We’ll you let me do it the other day.’ It then becomes much harder to discipline them. You have to be consistent.

3. Have clearly set out sanctions

Though parents have more choices, you too should have a limited number of punishments. The naughty step is a common one for young children. As they get older you can deny them access to phones, computers or games. In serious cases, they can be grounded. It’s your choice.

You have to make it clear what punishment is given for what offence and always keep it as that. Similarly you always need to keep the same pathway. The three warning pathway is a good one because by the time they get punished they will have had three chances to rectify their behaviour and there is little they can say to object to that. ‘I’ve told you to turn that music down three times now; if you do it once more I’ll take your phone for 24 hours.’

The biggest mistake parents make is showing a lack of consistency. We keep warning them and warning them and then we let them off. As a result, the next time they do the same thing and we try to punish them they say, ‘You didn’t do that last time, that’s not fair.’ Or even worse, when you punish one child for something that you let another get away with the day before. And that really isn’t fair.

It might make you feel a little guilty actually carrying out the punishment and the softy in you is probably what makes you let them get off. By doing this you set yourself up for long-term problems. Your child isn’t stupid, they quickly learn to understand that you don’t carry out your punishments and that, in reality, they can keep getting away with misbehaving.

You need to look at why you are inconsistent. Do you only carry out the threat of punishment when you are angry and let them off if you aren’t? If so, you are punishing them for your behaviour, not theirs. You need to apply the rules whatever mood you are in.

5. Be consistent as a family

As you will have noticed by now, I keep using the word ‘consistent’ and I can’t stress it’s importance enough. Young brains really do need to get the same message reinforced over and over if it’s going to change their behaviour.

In schools, the expectancy is that all teachers will apply the same rules in the same way. It also has to be the case with all adults in the home. If mum does it, dad has to do it too. If not it will be mixed messages all around and it will  not work at all.

This also needs to apply in families where parents are separated. If a child spends time living at both parents houses it can cause real problems if they have completely different ways of dealing with behaviour.

What this means is that, as parents, whether living together or not, there needs to be an agreement about what your rules, punishments and pathways to that punishment are and an agreement to be consistent in applying them.

If a teacher has a disciplinary issue with a child and calls in a senior member of staff for assistance, one thing that is guaranteed is that the teachers will support each other. You won’t find the senior teacher letting the child off behind the other teacher’s back. This support means that teachers are always confident in upholding the rules and keeping the system going.

The same needs to happen at home. If you are telling your child off, the last thing you need is your partner to intervene and let them off. Even if they disagree with you, they should support you in dealing with an incident and then discuss their disagreements later when the behaviour of the child has been dealt with. So, if mum has banned a child from using their phone, dad cannot let them use it during that period.

If you cannot support each other, you are going to have real difficulties in maintaining consistent discipline in your family.

7. Keep calm and carry on

A word about how to deal with situations. One thing teachers try to avoid at all costs is what we call ‘flashpoint situations’. This is when a student and teacher get into a confrontation with each other. In situations like this, when both parties might be angry, it’s a good idea to stop, let both parties calm down and resolve the issue in a more civilised manner later. Failure to do so can blow even small things out of all proportion.

One thing that can cause this is shouting. Whilst teachers may shout at a whole class, they will try not to shout at an individual child, especially in front of the rest of the class. Try the same with your own child. Be calm when you discipline and  don’t embarrass you child by shouting at them in front of other family members or friends.

If a confrontation is happening, just walk away and deal with it later. Otherwise, you could make matters much, much worse.

If you ask a school for a copy of their disciplinary policy you’ll be surprised to find that it deals with the staff. If you ask for a child’s version you’re more likely to be handed a ‘Rewards and Sanctions Policy.’ In schools, the two go hand in hand and quite rightly so. Whilst sanctions are a way to deal with negative behaviour, rewards are used to encourage positive behaviour.

And just as there are clear guidelines on what punishments are and the pathway to them is, you’ll also find that kids in school know what the rewards are and the pathways to achieve them. If I do this, I get this reward. At home, it can be very arbitrary. If you child tidies their room one week you might give them some spending money for it. The next week you might not.

And just as there are clear guidelines on what punishments are and the pathway to them is, you’ll also find that kids in school know what the rewards are and the pathways to achieve them. If I do this, I get this reward. At home, it can be very arbitrary. If you child tidies their room one week you might give them some spending money for it. The next week you might not.It’s a very good idea to introduce rewards at home. As

It’s a very good idea to introduce rewards at home. As a parent, you need to discuss what you are going to reward and this could be a behavioural issue you want to deal with. If your child is constantly giving back chat, then reward them for each full day that goes by when they do not do it. It can also be used to develop good habits: trying new food, completing chores, etc. Whatever you want. 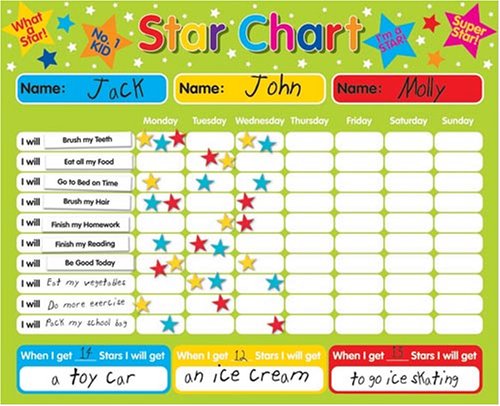 A good way to do it with younger children is with a rewards chart, like the one pictured. For children in early school years getting a star to stick on a chart is a reward in itself. However, you can then boost the reward by giving them something special if they achieve a target.If a child gets a star every day of a week for not giving back chat, then at then end of that week you can reward them with a treat.

If a child gets a star every day of a week for not giving back-chat, then at then end of that week you can reward them with a treat.This can  have far more impact on changing a child’s behaviour than threatening them with the naughty step.

This can  have far more impact on changing a child’s behaviour than threatening them with the naughty step.

Of course, a rewards chart is not going to get much of a thumbs up from a teenager, so for them, it might need to be recorded differently.

Schools do keep a record of all a child’s reward points and at my last school, these were totalled up at the end of each term. Those who did well were rewarded with a trip.

You might just need to keep a personal record. You can actually download free apps for your phone specially made for the task. The important thing is letting your child know that you are rewarding them for their good behaviour and are doing it consistently.

The biggest single thing you can do to improve your child’s behaviour is the simplest. Praise them whenever they do something that you want to instil in them. It shows them that you are taking note, paying them attention, that you appreciate what they are doing and that you love and respect them. This little thing can have a massive impact.

As an experiment, try one day to record how many times you tell them off and how many times you praise them. If done rightly, the number of praises should far exceed the number of times you tell them off. If you find it is the opposite then you just need to remind yourself to be more conscious of rewarding them. Failing to praise can be a bad habit we all fall into, especially as they get older.

More: Find out why kids bully in school

How To Stop Your Child Bullying